I am Otto Brechler, 30 years old and though as of now I have not received an exact medical explanation on my gradually declining health state, I do not give upand go on fighting day by day in order to stand up, leave the wheelchair behind and fulfill my dreams.

My story began in 2012, that was when I started experiencing some kind of unusual weakness, then my condition commenced to worsen; the stick that has helped me to walk was soon replaced by a wheelchair and today I need help with basic tasks like having a glass of water or other daily necessities.

At the moment, it is my mother taking care of me. During these last couple of years we both have been through an extremely rough time. In the space of these 3 years I have been to countless doctors and even tried some alternative methods but to this day, no one has been able to tell me the reason of my illness.

Personally, I do not look at my situation as an illness, rather as a sort of challenge, an obstacle I need to topple and there is no other option than eventually stand up and walk again.

Let us go back to August 2012, when it all started with the weakness of my right foot that I did not pay any particular attention to. A little later my coworkers told me about how different my walking was, my right foot kept stomping on the floor.

After that, in September 2012 I went to see my GP with the symptoms and he sent me on for a neurological test. After several months of waiting I finally had an appointment with a specialist but by that time the weakness has gotten remarkably worse.

Back then I was not really concerned and thought it must have been a mere heath problem that would soon be solved by my doctors. In February 2013, so nearly half a year had passed, since my first examinations and after consultations with my doctor I was still standing there with no actual answers, in addtition, by then, my health state has continued to decline, at times I stumbled and my foot was less and less controlled. That was when I realized I was not standing in front of an average, everyday bug, there was something serious behind.I also became troubled about not finding out what caused the more and more obvious problem.

During that time I was working in Germany, had a good job that I definitely did not want to lose so I kept on pushing my limits and still do my best.

Then came the inner voice saying I should be taking this health issue way more serious because just a lot of time had passed without getting any actual response or solution, meanwhile my condition continued to deteriorate, and that scared me. I stuck to thinking to try and hold on to my beloved job abroad, no matter what.

That drove me to look up private cabinets of further specialists, where, based on my test results they found out that my foot weakness was caused by syringomyelia within my spinal cord for which there is no cure, is non-resectable and just something you have to live with. Other than that, I did not get any further information this time again, regarding my prospects, whether I would be able to continue to work and where I could start looking for a solution.

Because of my condition, in April 2013came the moment I had been afraid of: my employer did not extend my working contract, so I was left without a job and a solution. I was torn and broken, feeling helpless in this situation.

I decided to not to leave it at that and turned to the Clinical NeuroScience Center in Pécs, Hungary for futher tests. After these, based on their results, my doctor established a diagnosis that said my problems were caused by ALS (amyotrophic lateral sclerosis.

ALS is a fatal disease that causes the death of brain and spinal neurons responsible for innervating voluntary muscles, patient loses the ability to move, and all muscles slowly waste away, eventually respiratory muscles fail to work as well.

The actual reason of ALS still remains unknown, nor is there a cure for it. Nowadays, medical and co-medical sciences focus on providing ALS patients with a bearable, human quality of life and care.

This news left both my mother and I shocked, since I was basically told to probably die whitin 3-5 years.. After hearing that my mother had a complete mental collapse. To me it was still hard to realize why I was the person these things were told to. Why was this happening to just me?

My doctor also informed me that with the progression of the disease I could not expect of receiving further treatments of rehabilitation and physiotherapy and advised me to get started with the procedure of claiming disability support pension.

After the establishment of my diagnosis I once again decided on not giving up but try and look for and grab on every opportunity that seemed to give any chance to recover and that is how I ended up at the National Rehabilitation Institute where I had the chance to take part at a month-long rehabilitation treatment.

At that time, I was still able to take care of myself and walk with a peroneus lifter. But unfortunately enough, my condition kept turning for worse to the point where, in October I started using a stick for walking and a peroneus lifter for my left leg as well and for getting around indoors, a pair of crutches.

Meanwhile, my rapidly deteriorating condition has had impact on my private life as well, this situation has indisposed my girlfriend who eventually left me in January 2014. This event was another mental break to me.

From February onwards I was no longer able to drive a car that used to mean the world to me, it was the equal of freedom in my eyes, so after my girlfriend, I lost my second „dearest one”, the freedom of driving.

Being vulnerable to this high degree because of my wheelchair and the fast paced decline in my condition has put me to my lowest point mentally as well and I was facing an extremely challenging period of my life in every aspect.

For mental support, I could rely only on my close family and a handful of friends because with the overwhelming symptoms more and more people were turning away from me.

I too have darker days, just like everyone else. On these days, when I feel like talking to someone but none of my friends is available, I remain on my own with my dog, Kókusz (Coconut). He is always by my side and gives me so much love that is difficult to put into words.

In April 2014 I contacted the Institute of Rare Diseases Diseases in Budapest that I had read about in an online forum for patients with similar background. Here, based on my previous test results I was told that in their opinion I was not suffering from ALS and it was vital to go on with further examinations in order to find out the real reason behind my problem, my check-up was launched right there and then.

Feeling helpless, I had previously turned to alternative medicine and learned about a few methods and tried to find the real cause of my problem with their help.

In September 2015, after a bit more than 1,5 years of waiting, I received the results of a genetical blood test done by the Institute of Rare Diseases that excluded ALS disease, therefore contradicted my original diagnosis, but my actual disease still remained indeterminate. 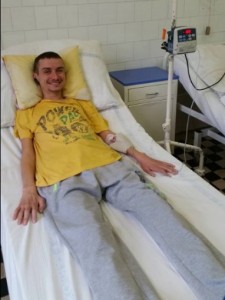 In the beginning of February 2016, following additional tests executed by the Institute of Rare Diseases my doctors had me undergo a new treatment called „IVIG” that comes with a fairly favorable prognosis and I even experienced some improvement after my first session.

To top it off, I finally learned about the actual nature of my illness: Chronic inflammatory demyelinating polyneuropathy- Multifocal Motor Neuropathy (CIDP- MMN).

CIDP is a particularly rare disease, that is -unlike ALS-curable curable and has a much more positive expectancy. Its emergence is due to the weakness of one’s immune system and causes antibodies to attack motor nerves.

eddig IVIG infúzióval kezelt betegek 80%of patients receiving IVIG has reached a quasi-complete recovery, living a symptom-free, full life. These facts, and regaining my hope to recover give me even more motivation.

My long term goalis to help others with similar symptoms through my example. Throughout my time of fighting my disease I have gathered a decent amount of information and I am currently working on creating an online database in order to pass on this knowledge to those who might need it. Furthermore, I would like to give fellow patients hope and motivation to never give up!

Thank you for taking the time to read my story! Please, check out the goalsI have set with the Ottoert.hu team, my closest supporters and friends that make it possible for me to go on fighting and be able to stand with both feet on the ground again!